Dustjacket or Eyesore? You Be The Judge.

Let's talk dustjackets - and what's under them.

Dustjackets were originally strips of plain paper, wrapped around a newly-bound book to keep it clean until the bookseller had a chance to sell it. But a paper wrapping meant nobody knew what book was underneath, so dustjackets started to be printed with the title. Well - as long as you're running a printing press anyway you might as well put something more interesting on your strip of paper, so dustjackets began to sport brightly-coloured illustrations and bold lettering, and they became works of advertising art on their own.

All very logical, but with that change your bookshelf filled with quiet browns, maroons, and tans turned into a dizzying array of bold graphics and bright colours.

Which gave me headaches and a decorating problem.

I've got - well, I don't know - at least a thousand books. No, make that 2,000 ... make it more. I've got bookcases packed against every spare bit of wall space, and when I ran out of wall space I put two back-to-back, one across one end, and bingo - a 3-sided bookcase island. Trouble is, each bookcase was a major source of eyestrain, as all the brightly-coloured dustjackets competed with one another.

So one day, I took them off.

And what to my wond'ring eyes did appear: 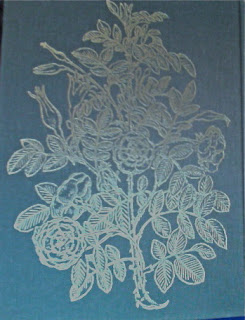 This intricate 7" x 9-1/2" gold foil stamp was buried under the bright green garden-printed dustjacket of the "Reader's Digest Encyclopaedia of Garden Plants and Flowers" for 20 years before I re-discovered it.

The colour of the cloth cover isn't clear here - it's a medium brown, nothing too bright. And the spine just has the title, stamped in the same dull gold. So to summarize: I had the choice of a gaudy multi-colour printed shiny plastic-covered dustjacket, or this elegant oasis of quiet beauty.

I'm sure you already know where I'm going with this. I took off all the dustjackets that could come off. And my shelves became restful and pleasing to the eye. Even my modern hardcovers had, for the most part, plain cloth spines with foil-stamped titles, some of them quite beautifully done.

Of course, some publishers are still my enemies. There's no point in taking off the bright dustjackets on your Harry Potters, for example, because the book underneath is exactly the same. So those books go on the shelves that aren't readily seen - the bottom shelf, or the ones in the hallway.

I threw the dustjackets away - at least the modern ones. I know book dealers who would cringe at that, because used books sell better when they have the original dustjackets, but I do not care. I bought these books for me and their resale value - if any - doesn't worry me.
Posted by Adele at 12:57

Email ThisBlogThis!Share to TwitterShare to FacebookShare to Pinterest
Labels: design