Hand Made, Imperfect, and Proud

Machines ruined it for the hand craftsman. Don't get me wrong - I can see the beauty in the utter regularity of machine decoration. It is wonderful. About a hundred years ago it also became normal, and that is where the problem started.

Look at hand craftsmanship throughout the ages and you will see imperfection. The hand simply cannot work with the same precision as a machine, and everybody used to know and understand that. Now almost everybody expects work done by hand to be as exact as work done by machine - or else it is wrongly done. It is bad. It should not be paid for.

One woman came in to the bindery to pick up her rebind. She took a cursory glance at the binding, whipped out a micrometer and started measuring the squares under magnification. She was able to show that one of the squares was different from another by 1/64th of an inch - less than half a millimeter. She tried to refuse to pay for what she called shoddy work. Happily for her she was dealing with a nice polite man who tried to humour her. If she had complained to me I would have asked her to write her name twice on a piece of paper and prove to me that each signature is an exact copy of the other.

Honestly, folks, can we get real here? I present this handsome cover from a series of issues of Harper's Magazine, 1852/1853. 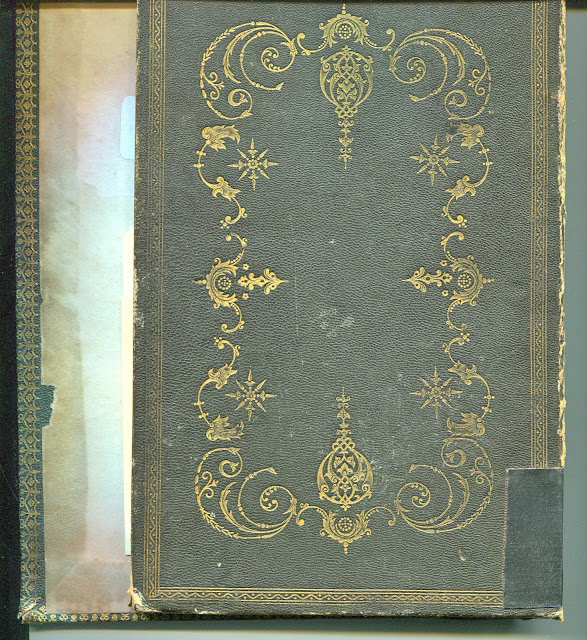 This is handwork from when handwork gained respect. Let's look at what went into the decoration of this cover.
First, rolls were applied to put the gold on the outside frame and the inside turn-ins. This is gold done the old-fashioned way, with glaire and leaf and expert knowledge of  the appropriate temperature and humidity required.
Now to figure out how many different brass hand tools were used to create the cover design. Today that complicated design would be made by submitting detailed graphics to the diemakers and having a deep-etched die made. It's expensive, but - one stamp and you're done. In this example, though, they selected from their large collection of finishing tools, applying them individually to make up the whole design.  You can tell because of the imperfections. Hand placement simply can't be done with machine accuracy - individual stamps are slightly askew or one will be made more deeply than another - examine the photo with that in mind and you can see the tools quite plainly.
I find a minimum of seven tools:
2 large scroll corners - one a mirror of the other.
1 urn shape found at centre of the top, bottom, and sides.
1 rounded ornament centred top and bottom.
1 star shape.
1 leafy scroll filling in the distance from corner scroll to the centre urn shape.
1 lozenge shape at centre sides.
plus possibly 2 more: the little flowers on either side of the lozenge at side centre, and the pattern of four dots at the end of the leafy scroll.
Whew! Seven tools and twenty individual stamps plus two rolls for each side of the book (and yes, the cover design was repeated on the other side). Today that would be a lot of chances for the thing to go horribly wrong. But back in the day, this was acceptable - probably even beautiful, and nobody flourishing a micrometer would have been listened to at all.
Another thing that isn't acceptable now and was then - look at the bottom left of the photo, where the rolled frame on the outside cover meets itself at a 90-degree angle. Today you are expected to make every effort to butt those lines perfectly, or to use some kind of special corner stamp to avoid having to make them butt together. Now, given the wavy line feature, butting it so the line continues is possible, but not likely. To have the wave continue around the corner without a break, you have to not only be very careful, very expert, very willing to sit with a needle and scrape off the gold that goes in the wrong places - you also have to have made the line exactly the right length so that it can butt perpendicularly at 90 degrees with your other perfect line. In the 1850s, though, it was perfectly acceptable to just run those lines across one another.
I guess what I'm on about here is that the modern consumer, influenced by what is possible using machines, has forgotten that 'made by hand' means 'made by humans'. When we look at something made by a human and the first thing we notice is that a line doesn't connect exactly, or one thing isn't directly lined up with another - then the problem isn't with the object - it's with us.
Posted by Adele at 14:26